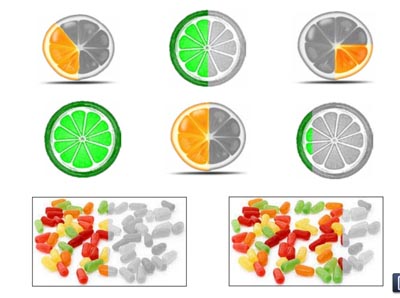 I love teaching first grade because I get the honor of introducing my students to wonderful mathematical concepts for the first time. The concept of fractions, for instance. What isn’t exciting about it? That we can divide a concrete whole into bits, mix them up, and then put them together whatever way we like is a mind-boggling concept when you think about it. One is not an indivisible atom; it is a number that can be cut up any way you like. Playing with fractions is an exciting game, a game you as a first grade teacher have a special chance to introduce.

Here you’ll find my fractions lesson plan for first grade, as well as the handouts that go with the lesson. I find playdough a wonderful tool to use when teaching fractions in first grade because it lends itself well to out of the box division. A ball of playdough can be divided into parts of any size and then put back together, and working on division with playdough also allows the student to explore the infinite possibilities of ways to divide up a mass into a given number of equal sets. You can make enough playdough for the whole class at very little cost, using my easy recipe. Once you’ve finished whatever classroom use you want to make of the playdough, let each child take their lump home in a Ziploc bag. Include a printout of game instructions for the parents so your math explorers can continue their fraction learning at home.

If an answer is not immediately forthcoming, give them a chance to think about and discuss the problem. It should not take them long to come up with ‘dividing the apple into two pieces’ or ‘half’.

Tell them they are right. Ask where you should cut the apple to get halves; you may offer them some choices; perhaps a third to the right, middle, or a third to the left. Lead them to discover that any other slice but right in the middle will lead to unequal parts.

Take the sandwich and ask them: if I have only one sandwich to give to two students, how much sandwich will each student get? Your class should be ready with the answer “half”. Ask how the sandwich should be divided, and allow yourself to be guided to make a cut in the center. Ask how many halves are needed to make a whole.

Now take the sliced apple, holding it as a whole with the two halves together. Tell the students that now you don’t have only two students you need to give this apple to; you need to give even portions to four students. Allow them to discuss how to attack this problem. Allow yourself to be guided to cut the halves in half again, making four quarters. Tell then that these are called quarters, and ask how many are needed to make a whole. Ask which is larger, a half or a quarter. Ask how many quarters make one half.

Now distribute the playdough. Show the class your rectangle, and ask them to shape their playdough into a rectangle like yours. Now tell them they need to divide this rectangle into two halves. Allow them to cut it with their butter knives. If they end up with very unequal halves, encourage them to stick the two halves back together and try again. Cut your own rectangle in half, and demonstrate that if the halves are equal, they will be able to stack neatly on top of each other.

Stick the two halves of the rectangle back together, and tell them that now you don’t want two halves; you want four quarters. Ask them to cut their rectangle in four quarters, and allow them to do this their own way; either two perpendicular cuts or four parallel cuts. Cut your own rectangle with two perpendicular cuts; lay your pieces on top of each other and tell the class you can check your work by seeing the way they stack neatly on top of each other. Ask them to check their own quarters. Ask which is larger, a quarter or a half. Ask them how many quarters make a whole.

Take out your pizza-shaped flat circle, and ask the class to reform their dough into a pizza like yours. Now ask them to divide it into two halves, and check the halves to make sure they are equal.

Stick your two halves back together, and have the class do the same. Tell them that now you want them to divide it into quarters. Let them work it out themselves; if they have trouble, you can demonstrate with two perpendicular cuts on your playdough pizza. If anyone uses parallel cuts, show them how it’s much harder to make sure the parts are equal that way, and encourage them to put the pieces back together and use perpendicular cuts instead.

Ask which is bigger, a half or a quarter, and ask how many quarters will make a whole.

Have your students make the playdough into a simple lump, and then ask them to divide the lump into two equal parts. Tell them these are halves too; ask them how many will make a whole. Ask them to make quarters, and ask how many quarters are needed for a whole.

If you have extra class-time, have your students complete a fractions worksheet, and send them home with their lumps of playdough and your parent handout.

For every four students, you’ll need:

Mix all the ingredients but the flour in a pan over moderate heat,  stirring to dissolve the salt. When it is quite warm, remove from heat and add the flour. Stir it with a spoon, and when it begins to come together, knead it with your hands till you have a non-sticky playdough consistency. Store in a sealed Tupperware container or a ziploc bag.