Triangles can be classified by various properties relating to their angles and sides. The most common classifications are described on this page.

A right triangle has one 90° angle and a variety of often-studied topics: 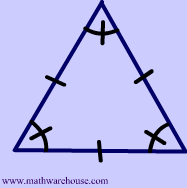 The Isosceles triangle shown on the left has two equal sides and two equal angles.

The Scalene Triangle has no congruent sides. In other words, each side must have a different length.

The Acute Triangle has three acute angles (an acute angle measures less than 90°).

Since the total degrees in any triangle is 180°, an obtuse triangle can only have one angle that measures more than 90°.

What kind of triangle is pictured below?

What kind of triangle is pictured below?

What type of triangle is pictured below?

Classify the triangle on the left.

Assuming the picture is to scale, the triangle on the right is definitely obtuse (see the blue angle) as well as scalene.

Classify the triangle on the left.

Assuming the picture is to scale, the triangle on the right is definitely acute as well as scalene.