Triangles Side and Angles

Triangle Calculator (This free online tool lets calculates all sides and angle measurements based on your input and draws a free downloadable image of your triangle!)
Triangle Worksheets

Triangles are one of the most fundamental geometric shapes and have a variety of often studied properties including:

Rule 2: Sides of Triangle -- Triangle Inequality Theorem : This theorem states that the sum of the lengths of any 2 sides of a triangle must be greater than the third side. )

Rule 4 Remote Extior Angles-- This Theorem states that the measure of a an exterior angle $$ \angle A$$ equals the sum of the remote interior angles' measurements. more) 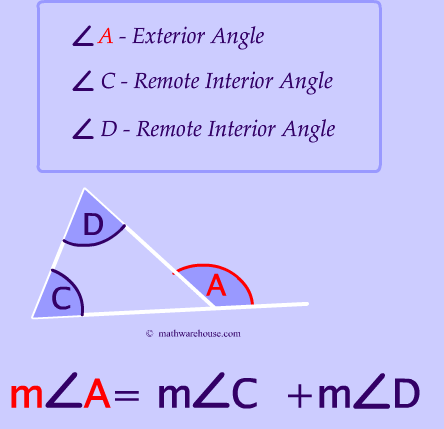 What's the difference between interior and exterior angles of a triangle?

This question is answered by the picture below. You create an exterior angle by extending any side of the triangle.

Interior Angles of a Triangle Rule

To explore the truth of this rule, try Math Warehouse's interactive triangle, which allows you to drag around the different sides of a triangle and explore the relationship between the angles and sides. No matter how you position the three sides of the triangle, the total degrees of all interior angles (the three angles inside the triangle) is always 180°.

Drag Points Of The Triangle To Start Demonstration

What is m$$\angle$$LNM in the triangle below?

Use the rule for interior angles of a triangle:

Use the interior angles of a triangle rule:

Relationship --Side and Angle Angle Measurements

To explore the truth of the statements you can use Math Warehouse's interactive triangle, which allows you to drag around the different sides of a triangle and explore the relationships betwen the measures of angles and sides. No matter how you position the three sides of the triangle, you will find that the statements in the paragraph above hold true.

(All right, the isosceles and equilateral triangle are exceptions due to the fact that they don't have a single smallest side or, in the case of the equilateral triangle, even a largest side. Nonetheless, the principle stated above still holds true. !)

Back to Geometry Next to Triangle Inequality Theorem