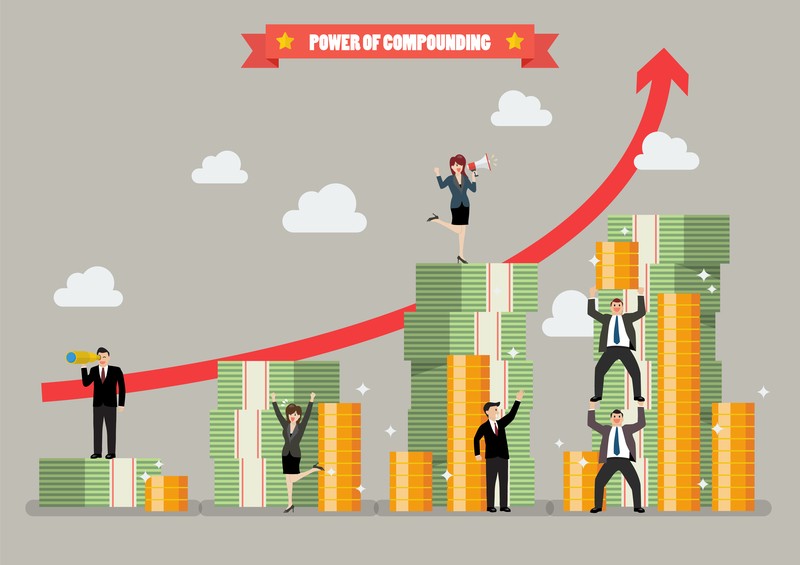 Do you know the following saying:

Given Einstein's love for the Universe and all its powerful forces, it does sound like he wanted us to take notice.

But what is it about compound interest that makes it so potent? Can a simple mathematical concept really have so much power over how we borrow and save so as to affect our financial well being?

Most people are aware of the financial trouble that Greece found itself in back in 2007-2008. We also keep hearing about the United States hovering close to its "debt ceiling" every now and then. These are cases of debt ballooning over the years and reaching a level that could threaten to bring even rich and powerful nation states to a grinding halt. Debt in itself is scary enough, but when you add compounding interest to it, it can become crippling.

But, it's not all gloom and doom. There is a flip side to it. What if instead of paying this ever growing pile of money to someone, you were instead earning it? This is the promise behind many saving options like retirement plans, interest bearing saving accounts and even some stock market linked investments. Before we get into that though, let's look at what compounding interest really is.

The math behind compound interest

(more on the formula here )

This formula can help you calculate the final amount with a compounded interest for any situation under the sun. Let's break it down into its components or "variables" as they are usually called.

A = This is the final amount at the end of the term of the loan/investment. It includes the principal as well as the compound interest accrued over time.

P = This is original principal amount at the beginning of the loan or investment.

t = This is the total time or duration of the loan in years. If the period is less than one year, you can use fractions. For example, 6 months would be 0.5 years and you can enter 0.5 in the formula.


Most people (include seasoned investors) do not use this formula every time though. They simply use a calculator or some software like MS Excel and you can do the same here.

How the Formula Really Works

The Logic behind the formula.

If you don't like looking at formulas, here is how it really works.

This loan is equivalent to taking a loan for ONE month and then rolling it over 11 more times.

Let's start with the month of January.

We can keep doing this for the each month and get the SAME result as with using the formula.


A simple loan with monthly compounding

Sally and her credit cards

The math is good and all but how does it work in real life? Let's say that our friend Sally has a loan of USD 10,000. Let's say that her bank charges her an Annual Percentage Rate (APR) of 24%. Here are the different Examples:

In this situation, Sally is simply charged an annual interest rate of 24% or USD 2,400 every year on her loan. Her total liability at the end is USD 12,400.

Sally's annual rate is 24%, which gives us a monthly rate of 2%. We have already calculated this Example in the earlier table and we know the result is USD 12,682. Notice how this amount with compound interest is higher as compared to the amount in the simple interest Example.


Here is what we get from our three Examples:

So there you have it. Even though the principal (USD 10,000) and the interest rate (24%) charged is the same, the frequency of compounding itself can have a significant difference in the total loan amount. The difference might not seem like much – but we have done the calculation for only one year and for a modest loan of USD 10,000. Over the course of your lifetime, the difference can easily be in the hundreds of thousands of dollars. It is certainly not something that you should be willing to ignore.

Fortunately, the immense multiplicative power of compound interest can work in our favor as well. A very basic example would be a simple saving account. If you put some money into it and forget about it - it will keep growing over time, just like the interest payments in our previous loan examples. However, the interest rate for savings accounts is not high enough for it to be an attractive option for saving.

This is where the various investment options come in. Whenever you reinvest money that you make from an investment, you are in a way gaining the benefit of compounding interest. In some cases you have to do it manually, but many investment plans do this for you automatically.

Let's take a look at a simple retirement plan which has a 7% annual rate of return, compounded annually. For simplicity's sake, we assume that the investment happened only once, rather than a recurring investment.

Using the calculator, we can see that Sally's investment is now worth USD 62,139.

Use the following values for the calculator:

Now let's look at how much money Margaret made, who invested twice the amount Sally did, but did so in 2005. Plugging the numbers into the calculator, we get USD 45,044.

This is the power of compounding. If you take a 401(k) account which not only gives you the benefit of compounding interest, but also tax savings and an incentive to invest annually - you can make a significant amount of saving. In fact, one of the main reasons the Government provides these tax benefits is so that citizens are further incentivized to take advantage of these saving plans and secure their futures financially.

It's practically impossible to calculate this by hand, but the power of mathematics gives us a formula to calculate the same. You can use the calculator at this link if you are interested.

However, you should not be worried about this too much as the impact of this continuous compounding is small. Also, very few loans are actually continuously compounded. As already mentioned, credit card are mostly compounded on a daily basis only.

We have seen the power of compounding - both to drag the careless few further into debt, and to provide those who make a habit of saving with a comfortable and ever growing retirement cushion.

Before taking on any kind of loan (including credit cards!), make sure you are fully aware of what the exact terms of the loan are. Ask about the interest rates, ALL fees and charges and the compounding frequency. You can then plug these values into a calculator and get the exact amount that you would owe. The most important thing to remember for your financial well being is that even a small difference in charges, fees or interest rates can make a massive difference over time - especially with compound interest.

Back to Compound Interest Next toContinuously Compounded